People are fascinated by professional ads which have a unique visual and animation style, yet making them happen takes a lot of knowledge in 3D animation and motion graphics. This training will give the participants an opportunity to get technical knowledge on software while preparing them to enter the world of advanced principles of animation, video, typography and graphic style for TV or Social Media.

People are fascinated by professional ads which have a unique visual and animation style, yet making them happen takes a lot of knowledge in 3D animation and motion graphics. This training will give the participants an opportunity to get technical knowledge on software while preparing them to enter the world of advanced principles of animation, video, typography and graphic style for TV or Social Media.

As the Motion Graphics industry has seen a tremendous growth in the last few years, and the need for skilled designers in this field has been seen in the local market as well, this course will bring to its students the skill set needed to perform a full project from scratch to finish.

Amazing, yet very simple-looking ads have been swarming the TV. Whether it’s MTV, Nike, National Geographic or HBO, their seconds-long idents are slick and very easily recognizable. The students will be walked through the process of creating such projects, with the goal of finalizing one of their own.

The course is taught by a graphic designer, with years of experience in the field of motion graphics’ local and international market, as well as with many national and international publications, including: Ars Electronica Festival, “Motion Graphics” Book, received a certificate by TED Talks, work published by SolidAngle – Arnold Renderer Motion Graphics Served, Maxon, PC World (Italy), Mac World (Italy), exhibited work in Beaux-Arts – Paris etc. The information given will not only give a technical knowledge of the software but also prepare the students with the main ideas and principles of animation, use of typography on video and graphic style.

Although a fundamental knowledge of an image editing software is required (Adobe Photoshop, Gimp or equivalent), the course is open to beginners in 3D applications and/or motion graphics as well as intermediate users looking to get a better understanding of animation principles and graphical relations of elements in the composition.

Ultimately, the students will understand the whole process of creating a 3d animated video with integrated 2d graphics ready for broadcasting on different media.

☆  Who may attend this course?

Attendants of this Motion Graphics course may be focused on different fields, but willing and passionate to learn more about the principles of movement in a more graphical sense.

Whether you are a graphic designer, an art-oriented person, or simply interested in learning a new skill and you have at least a beginner level of an image editing software then you are more than welcome to join.

☆  Why should people attend?

After attending the Motion Graphics training course, candidates will be able:

The training course in Motion Graphics will be held 3 days a week with 3 hrs and is going to last 6 weeks.
In first week participants will get introduced with 3D Graphics. While understanding the basics of how this new field works, they will dive into modeling, using different operations in Cinema 4D, while being able to use Nurbs, Primitives, Instances and polygons. Further on they will be introduced to shaders, materials and texturing.

The second week will include a more in-depth look into texturing and explanation of color theory while explaining their interaction with lighting and rendering. By the end of the week, the basics of animation will be touched, while explaining in-app functions.

The third week the 12 principles of animation will be explained while putting into practice with different objects and a more advanced use of animation techniques will be used.

The beginning of the fourth week will include the end of 3D rendering, preparation of the files for After Effects. Finally the files will be imported in After Effects. The layer system and timeline will be explained, while 2d graphics will be added and animated accordingly.

The final two and a half weeks will be oriented on each student creating their own project from start to finish and refining their knowledge while testing out possibilities of what they have learned throughout the course.

VIII Animation and the 12 Principles
a) Timeline
b) Keyframes

IX Render I
a) Render
b) Render Settings

☆  What are the pre-requisites to attend this course? 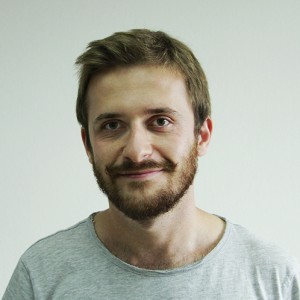 Leart Zogjani is a graduated graphic designer, continuing his master degree studies in the same field. He has also finished his studies in visual effects at Animation Mentor under the mentorship of Hollywood professors as well as done some of his schooling in Ecole Nationale Superieure des Beaux-Arts in Paris.

Further on he is the founder of Kokrra, a motion graphics and animation studio in Kosovo. As a motion graphics artist he has had the chance to work on ads and videos for different national and international companies and products. So far, his work has been published in: Motion Graphics Served (part of the Behance network – Adobe), Maxon (the makers of Cinema4D) gallery, PC World (Italy), Mac World (Italy) etc. His work has also been featured in several collective and personal exhibitions in Paris and Prishtina. With his previous company, he has designed “The Highland Lute”, an award winning game in Global Startup Battle, AppCamp Prishtina, Honorable mention in AppCamp Skopje etc. while having also worked on movie VFX for the New Zeland company Zodiac Entertainment.

Now he continues his work with Kokrra.