Cyber Academy is the most sophisticated training course available that will help you to enter in cyber security world, featuring an advanced hands-on computer lab environment challenging you to bring out your best penetration testing skills. The case studies include public vulnerabilities as well as vulnerabilities discovered by our team, all of which cover a wide range of applications and exploitation techniques.

Cybersecurity is the body of technologies, processes and practices designed to protect networks, computers, programs and data from attack, damage or unauthorized access. One of the most problematic elements of cybersecurity is the quickly and constantly evolving nature of security risks. To deal with the current environment, advisory organizations are promoting a more proactive and adaptive approach. The National Institute of Standards and Technology (NIST), for example, recently issued updated guidelines in its risk assessment framework that recommended a shift toward continuous monitoring and real-time assessments. Our course instructors are real world practitioners and understand that teaching how to audit security under “ideal” conditions is of little value. We place great emphasis on creating scenarios which are as close to real world circumstances as possible. This allows our students to use what they learn at Cyber Academy immediately into real world pentesting assignments! We challenge our students to think out-of-the-box as most real world environments are unique and generally cannot have pre-determined tailor made solutions.
This course it’s idea for students of computer science and engineering, cyber security enthusiast and white hat hackers. 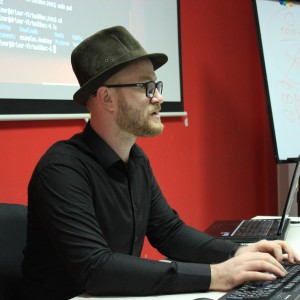 Drinor Selmanaj is a lecturer, entrepreneur and information security specialist from Kosovo.
He has spent his years consulting, auditing, and hardening IT-infrastructures in companies and organizations across the region.
As a lecturer, he has established a Penetration Testing programme at ICK which seeks to hone the skills of young technology enthusiasts looking into entering the field of cybersecurity.
His entrepreneurial spirit led him to found a software development company called “Hello World!” centered around creating secure and highly functional digital products for local companies and businesses.
He is the CTO and co-founder of “Sentry L.L.C” - one of the first companies in Kosovo to regionally offer products and an extensive list of services in information security.
As a citizen of Kosovo and a member of various hacker communities, Drinor is able to see both the needs of legitimate businesses as well as the needs of a darker digital underground.