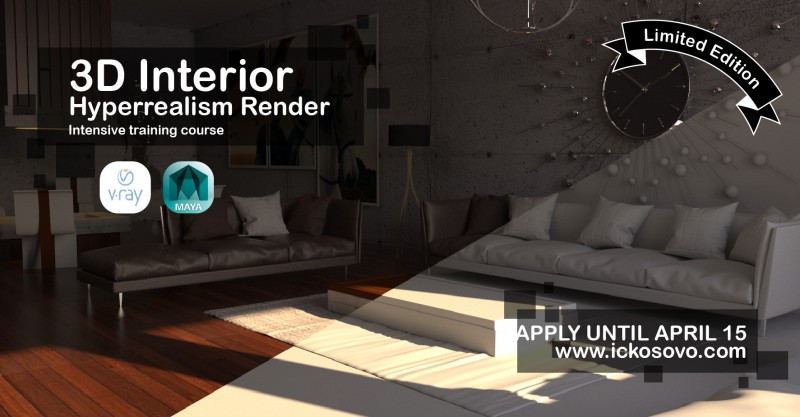 These days everything is becoming 3d from movies to the real world, everyone wants to have a 3d experience from random person to an artist. So, why not to learn it?

This course for any artist that want to enter this world of 3d or improve the skills towards advance level, also is dedicated for architectures who wants to learn how to bring their architecture projects into life. After this course completion they will be able to model and render any interior room with realistic render look. In this course they are going to learn how to make hyperrealism render for Interiors.

☆  Why attend this course?

For those who are interested to get into 3d world or improve the skills beyond this course is going to send you in different level of art.
By taking this course you will improve your skills in 3d world and you will achieve how to make hyperrealism of render.

☆  What will be learned?

☆  Projects included in this course

16 years of age or older
No experience needed

Besi started making his career working in commercials and feature films as Visual Effects Artist. He has participated in many forms of production in feature films in Hollywood Film Industry. His involvement goes beyond many forms when it comes to Hollywood Film Industry. With his cohesive vision and creativity he was invited to work on commercials for major companies such as: Nike, Alfa Romeo, Infiniti, Muppets, TMZ etc. Also he worked in feature films: Transformers 4, Ara, I Survived a Zombie Holocaust, Alone etc. He has worked as 3d generalist artist with some films as VFX Supervisor. Beside the film work he also has teaching career in Universities here in Kosovo teaching 3d Animation and Motion Graphics.