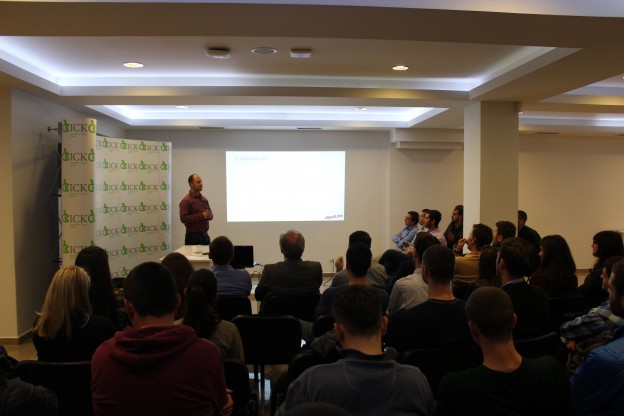 The team of Shpejt.me now part of the incubator of Innovation Centre Kosovo (ICK) was presented to the public on Friday October 11 2013. Four members of Shpejt.me presented their product which functions through the GPS of the users that connects them to restaurants in various neighborhoods in Prishtina depending on the customer’s location.

It all started one night in the garage of the family home of Edon Bajrami, one of four team members of Shpejt.me, when after long working hours , they were hungry and but lazy to go out to buy food.

A few months after their laziness produced an application that enables users to order food from those restaurants that are registered by the GPS. The connection between restaurants and clients it is based on GPS while wireless network is used to complete the order.

“The idea came by chance during late night hours, we had no credit on our phones and we wanted to eat since we were hungry, we did not want to go out neither could we order food by phone, and all of this happened last November”, Gëzim Berishaj while adding that “the idea was born by answering the question, why we don’t have an application that enables you to order food to be brought to your house without the need to call anyone”.
According to Berishaj food can be ordered with 5 clicks.

During the presentation of Shpejt.me at the Innovation Centre Kosovo (ICK) Darsej Rizaj said that so far have been made 241 orders and not a single one was a fake one. “A total of 241 orders were successfully made, we have invested in the system to prevent any fraudulent messages and so far we have successfully achieved this”, said Rizaj.

Safet Rama incubator manager at the Innovation Centre Kosovo said that Shpejt.me is one of five new teams accepted in the ICK incubator. “Shpejt.me has a business idea that has significant development opportunities and it will have the needed support from incubator in order to develop furthermore its business idea”, said Rama said, adding that Shpejt.me is accepted at the ICK incubator during the sixth round of the public call for business ideas.
‘Shpejt.me application works by registering restaurants that are close to clients using the GPS. Shpejt.me can be downloaded through App Store and Google Play. Shpejt.me currently has contracts with more than 10 restaurants, while currently is negotiating cooperation with other four restaurants. Shpejt.me except in Pristina intends to offer its services to other cities in Kosovo and Albania.

Athene Prosjektledelse, Norway and Kosovo Association of Information and Communication Technology (STIKK), Kosovo are the founders of ICK, and Crimson Capital LLC, Kosovo is the main cooperating partner. ICK is funded by The Norwegian Ministry of Foreign Affairs.