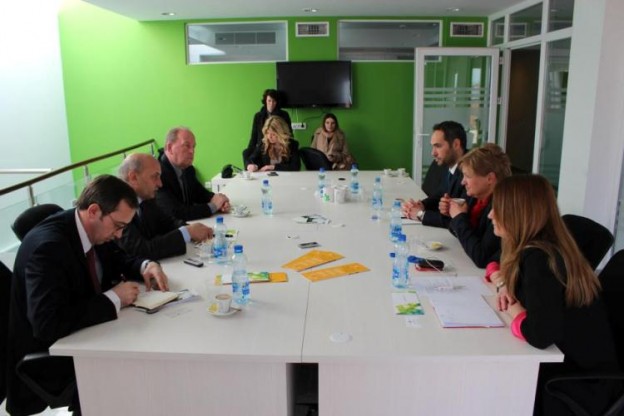 Mustafa visited Innovation Centre Kosovo on Wednesday, April 10, 2013. He was hosted by Uranik Begu Executive Director of ICK and by Vjollca Çavolli from STIKK and Kosovare Krasniqi from Athene Prosjektdelse.

Mayor of Pristina Dr. Isa Mustafa during his visit to the Innovation Centre Kosovo (ICK) was informed about the work and activities of the center. Mustafa also was introduced to a few of the current 17 tenant teams present at the ICK Incubator.

Mustafa visited Innovation Centre Kosovo on Wednesday, April 10, 2013. He was hosted by Uranik Begu Executive Director of ICK and by Vjollca Çavolli from STIKK and Kosovare Krasniqi from Athene Prosjektdelse.

“We had the opportunity and the pleasure today to have Mayor Mustafa for a visit here at Innovation Centre Kosovo where we discussed for opportunities for cooperation between the municipality and our center,” said Uranik Begu.

While Dr.Isa Mustafa mayor of Pristina said that ICK “it is a center which gives us the best example how to build economic policies and development policies and what one can do outside the local institutions because their idea is to deliver programs not only in Kosovo but also market for regional market, European and the worldwide market in terms of computer knowledge for what it will be a great success”, said Dr.Isa Mustafa mayor of Pristina referring to the work done by the ICK.

Mustafa also talked about identifying the support for ICK through grants within financial possibilities of the the municipality of Pristina, because it sees the center as a place for the preparation and the employment of young people.

Innovation Centre Kosovo (ICK) was founded to support entrepreneurship, innovation and commercially based business development, with a focus on information and communication technology. The centre supports both start-ups and existing companies with the potential for growth. Innovation Centre Kosovo offers incubator services, mentoring, consulting and training to entrepreneurs.

Communication Technology (STIKK), Kosovo are the founders of ICK, and Crimson Capital LLC, Kosovo is the main cooperating partner. ICK is funded by The Norwegian Ministry of Foreign Affairs.