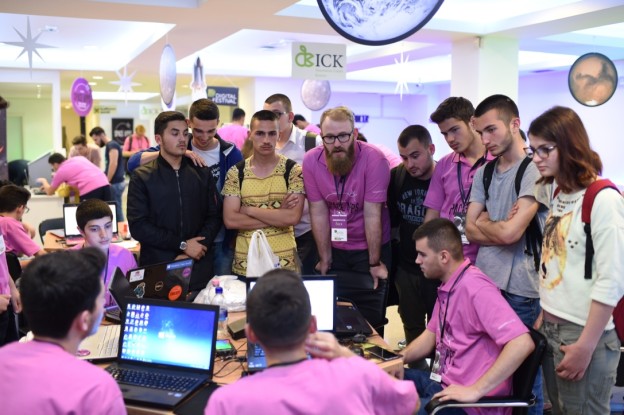 Around sixty young girls and guys sit around ten tables in the basement of the Innovation Centre Kosovo. All of them are clothed in pink, and all of them will be there for the next 42 hours. The Kosovar youngsters will be active for the NASA Space Apps Challenge, an international competition that aims to solve problems on the earth and in space.

All eyes are focused on them, because they have to keep the honor of the country. A Kosovar team (NatEv Explorer) won the last year edition of the Space Apps Challenge (winning the People’s Choice Award), which resulted in flying to the United States to attend a NASA launch event.

The Innovation Centre Kosovo (ICK) will host the teams, that compete with dozens of other cities around the world. From Africa to South America, from the USA to Australia. Thousands of coders, engineers, makers, artists and storytellers will be active during this weekend. “This 42-hour event inspires citizen teamwork for positive change across every skill level and discipline”, says the organizing website. The global award winners in six different categories receive an invitation to NASA to attend a rocket launch.
Pristina
The gathering of dozens of enthusiastic youngsters shows the strength of the startup community of Kosovo, and in particular Pristina. Not only because of the high number of attendants, but also because of a great number of mentors that will help the coders going in the right direction. Driton Hapciu, Mergim Cahani, Alejtin Berisha, Leutrim Blakaj, Vigan Budima, Mentor Pacarada, Milot Shala, Ermal Sadiku, and many others that are important for the tech ecosystem of Kosovo, will attend the 48 hours challenge.

“Groups can choose out of six by NASA selected challenges, for example with a ‘journey to Mars’”, explains Shpend Lila, event manager of ICK. “Every groups selects a challenge, and works on their own solution, just like all the other teams in the rest of the world. At the end of the weekend, we choose two winners for the global award and one that will run for the people’s choice award.”

‘I’m crazy about physics and mathematics’

Berin Balje is one of the participants: “I’m kind of crazy about physics, mathematics, and astronomy. I am a big fan of NASA and I always follow what astronauts do et cetera. When I found out that they organizing here in Kosovo a competition, I wanted to attend it. So I discussed with my teachers on school my project, they helped me, and my friends Timur and Nart a lot. We do a combination of electronics and engineering.”
The Space App Challenge started Friday night with a welcoming and dinner. After that, the real work started. They participants will work till Sunday night on their case ICK makes sure that also some socializing and recreation will take place.

Gjirafa.com, Universum College are collaborators. The hackathon is part of Digital Festival 2016, powered by Raiffeisen Bank Kosova. During the event, the Innovation Centre Kosovo will keep you up to date via their facebook page.