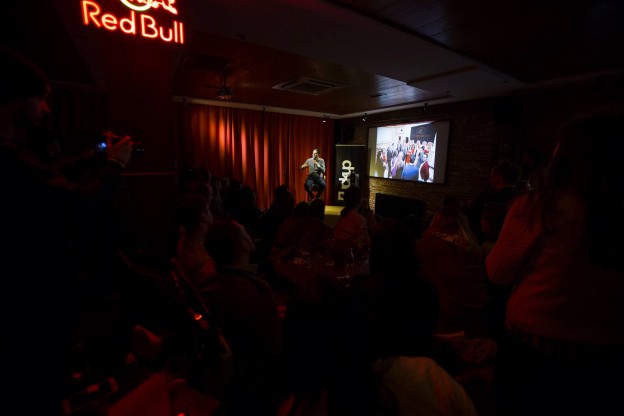 At a Thursday night, around 150 Kosovar youngsters gather in a café, in downtown Pristina. The people, most of them are in their twenties, laugh and drink beer. It won’t be long until they all will be quiet and listen to the country’s famous entrepreneurs. All of “FUN” speakers have one thing in common: they fucked up several times on the road of becoming successful.

‘If you don’t fail, you are not going to make it’

Just like in dozens of other places in the world, this modern bar in the capital of Kosovo is once a month the place to learn about failures. “In this context, we wanted to make it as less ‘painful’ as possible, and do it in a fun way by sharing experiences from successful people, like entrepreneurs, artists, journalists and politicians”, says Uranik Begu, director ofInnovation Center Kosovo, that organizes this event.

More open about failing
“Initially, we had once an event called International Day of Failure, in which we tackled this topic. We saw that the community appreciated this. Now, FuckUp Nights is a global event, and we are glad to contribute in an active way. We are happy to see that more and more people from our community are more open to talk about failing.”

And that is important, because who thinks that success comes without failure, is making a mistake. One of the speakers makes it clear: “If you do not try, if you do not fail, you are not going to make it.” His name is Agon Gashi, CEO of a successful Kosovar chain of retail stores. “It’s very important that you understand that the successful people that you see around you, failed at a certain point in time, and that they will fail tomorrow as well.”
‘Fear of failing’
And that is exactly the message of the FuckUp Nights in the youngest nation of Europe, with an active startup community. Every month, three entrepreneurs (or other public figures) have approximately fifteen minutes to share their biggest fuckup moments. A basic presentation with around ten pictures, guides them. Most of the talks are hilarious, and seem to make it more easy for others to talk about their failures. Gashi: “People can overcome the fear of failing.”

Currently, dozens of cities around the globe held every month a FuckUp Night. From New York to several cities in Brasil, from Barcelona to London, and from Melbourne to Johannesburg. According to the global organization, new businesses are more likely to fail than they are to succeed. “An average of 75 percent of companies shut down during their first two years of life. In other words, most companies fail, but we’re not learning from these failures in a systematic way.”
Failing is universal and the message of FuckUp Nights might be necessary everywhere, but maybe even more in Kosovo. At least, that’s what entrepreneur Agon Gashi thinks: “We needed an event like this, especially if you consider our culture. Because here in Kosovo, people always blame you when you fail, and they take your failure very personal. I am sure that the effect that FuckUpNights can have here, is maybe three times higher than in more developed countries.” Only time can tell if the personal failure stories do inspire the young Europeans. One thing is for sure: every month, all the available seats are booked before the beginning of the evening.

The Pristina edition is organized by the Innovation Center Kosovo, and has already received more than thousand participants, and almost twenty speakers at six evenings.