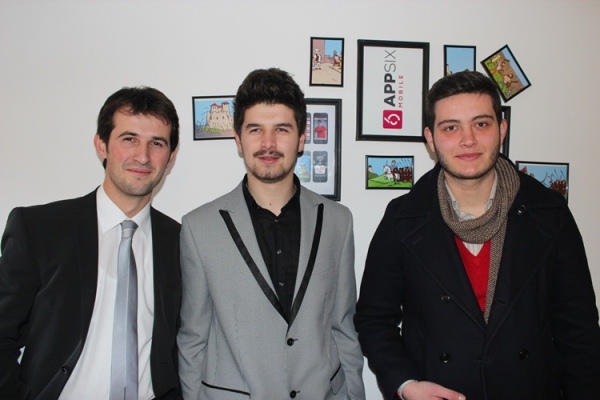 APPSIX and NETSIX, two new companies that offer mobile solutions and networking, have inaugurated their new offices located in the center of the capital of Kosovo.

Founders of these two companies APPSIX and NETSIX are part of the company Eduapps that is part of the Innovation Incubator Centre Kosovo (ICK). Eduapps so far has developed several educational applications for smartphones like ‘math4kids’, ‘abetarja’, ‘chemistry’. The company also deals with the creation of e applications for mobile platforms such as iOS, Android and Windows Phone. Blerta Thaçi, Agon Avdimetaj, Esat Pllana and Dorjan Berishaj co-founders of Eduapps incubator company are part of APPSIX. Eduapps was accepted at the ICK incubator after applying in the second round of the public call for business ideas at ICK.

“It should be noted that the company APPSIX Mobile without the professional help and continued support of ICK, would not have reached where it is now today,” says Dorjan Berishaj while adding that ICK has helped APPSIX and Eduapps to bring other applications in the market, such as apps from the educational field and other various services on mobile phone platforms. According to Berishaj ICK will always be a very important partner in the activities of these companies and the future cooperation between ICK, AppSix and NetSix will be continuous. Although Eduapps functions within the two companies it will continue to be part of ICK incubator.

“ICK considered as the basis of all our activity, and a constant pillar of support,” he concludes.  While NETSIX company where Agon Avdimetaj is one of the co-founders, is a company that deals with professional advice and solutions regarding computer networks. Athena Prosjektledelse, Norway and the Association for Information and Communication Technology (STIKK) in Kosovo, are the founders of the ICK, while Crimson Capital LLC Kosovo, is leading cooperative partner. ICK is funded by the Ministry of Foreign Affairs of Norway.